A word about Bentonite Clay

Note: we do not currently offer bentonite clay.  Dr. Clark was leery about clay products.  She claimed that, if not used properly, they could leave residues and clumps inside pockets of the bowel and actually become toxic over time.   If you DO use a clay product, it's a good idea to follow up with a good scrubber like psyllium to help clean up any clay residues. 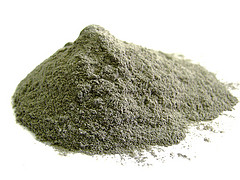 (Bentonite) Montmorillonite is a volcanic ash when a volcano erupts, there is often a fine steamer mist blown out which usually contains a substance known as a colloid or volcanic ash. This sifts to earth and as it contains many minerals (25 to 33 in Bentonite) it serves to mineralize the soil. Frequently, however, it can be mined in veins of 2 to 3 feet wide and deep but many yards long. Natives on every continent have used volcanic ash for Ages both internally and externally. The value of Montmorillonite lies in its very fine molecule and its negative electrical attraction for positively charged atoms. The extra fine molecule gives it greater surface area and thus stronger adhesive or pulling power, its negative charge enables it to pick up positively charged toxic material from the alimentary canal to be expelled in the feces. There is no evidence that it has any chemical action on the body. Its power is purely physical. There is no evidence that Bentonite's 25 to 33 minerals can be absorbed into the body because its own adhesive power seems to be stronger.

Technically, the clay first adsorbs toxins (heavy metals, free radicals, pesticides), attracting them to its extensive surface area where they adhere like flies to sticky paper; then it absorbs the toxins, taking them in the way a sponge mops up a kitchen counter mess.

There is an electrical aspect to bentonite’s ability to bind and absorb toxins. According to Yerba Prima, a company based in Ashland, Oregon, which markets Great Plains® Bentonite, the clay’s minerals are negatively charged while toxins tend to be positively charged; hence the clay’s attraction works like a magnet drawing metal shavings. But it’s even more involved than that.

Once hydrated (combined with water), bentonite has an enormous surface area. According to Yerba Prima, a single quart bottle can represent a total surface area of 960 square yards or 12 American football fields. Bentonite is made of a great number of tiny platelets, with negative electrical charges on their flat surfaces and positive charges on their edges.

When bentonite absorbs water and swells, it is stretched open like a highly porous sponge; the toxins are drawn into these spaces by electrical attraction and bound fast. In fact, according to the Canadian Journal of Microbiology (31 [1985], 50-53), bentonite can absorb pathogenic viruses, aflatoxin (a mold), and pesticides and herbicides including Paraquat and Roundup. The clay is eventually eliminated from the body with the toxins bound to its multiple surfaces.

Clay’s adsorptive and absorptive qualities may be the key to its multifaceted healing abilities. Knishinsky reports that drinking clay helped him eliminate painful ganglion cysts (tumors attached to joints and tendons, in his case, in his wrist) in two months, without surgery.

According to Knishinsky, benefits reported by people using liquid clay for a period of two to four weeks include: improved intestinal regularity; relief from chronic constipation, diarrhea, indigestion, and ulcers; a surge in physical energy; clearer complexion; brighter, whiter eyes; enhanced alertness; emotional uplift; improved tissue and gum repair; and increased resistance to infections. “Clay works on the entire organism. No part of the body is left untouched by its healing energies,” he notes.

A medical study by Frederic Damrau, M.D., in 1961 (Medical Annals of the District of Columbia) established clearly that bentonite can end bouts of diarrhea. When 35 individuals (average age 51) suffering from diarrhea took two tablespoons of bentonite in distilled water daily, the diarrhea was relieved in 97% (34 of the 35 patients) in 3.8 days, regardless of the original cause of the problem (allergies, virus infection, spastic colitis, or food poisoning). According to Dr. Damrau, bentonite is “safe and highly effective” in treating acute diarrhea.

Knishinsky’s research suggests that the regular intake of liquid clay (typically one to three tablespoons daily, in divided doses) can produce other benefits including parasite removal from the intestines, allergy and hay fever relief, and elimination of anemia and acne. For example, clay helps anemia because it contains both types of dietary iron (ferrous and ferric) in an easily assimilated form; it reduces discomfort from allergies by quickly neutralizing allergens that would otherwise produce allergic reactions; and it reduces heartburn and indigestion by absorbing excess stomach acids.

However, clay’s forte is probably its role as a general internal detoxification and cleansing agent. According to Keith Payne of White Rock Mineral Corporation in Springville, Utah, clay scrapes and cleans the lining of the colon. “As the colon becomes cleaner, its ability to absorb minerals and other nutrients increases, making the minerals even more bioavailable, thus giving more energy.”

White Rock’s clay, called Bentonite Minerals™, contains 71 trace and ultra-trace minerals, including many that are probably unknown to most consumers, such as ruthenium, tellurium, and thulium. Trace minerals enable the body to absorb nutrients—“they are the bonding agents in and between you and food,” explains Payne.

Bentonite Minerals are derived from an ancient seabed formation in Utah; according to geologists, the clay formed when a layer of volcanic ash fell into what was, long ago, a shallow inland sea. “As the ash filtered through the seawater, it collected pure minerals, forming a layer of highly mineralized clay,” says Payne.

The best way to drink clay is on an empty stomach, or at least an hour before or after a meal or immediately before sleeping at night, says Knishinsky. Typically, clay is available as a thick tasteless, pale-grey gel, but it also comes as a powder or encapsulated.

Generally, it is advisable to start with one tablespoon daily, mixed with a small amount of juice; observe the results for a week, then gradually increase the dosage to no more than four tablespoons daily, in divided doses. Drinking clay can be an annual spring cleaning of your gastrointestinal tract or it can be a symptom-focused, self-care method.

Psyllium Seed is an intestinal cleanser. Excellent for removing old accumulated mucus and feces that may have become impacted in pockets of the colon. Acts as a bulky mucilaginous material to aid in elimination.

Psyllium seed husks, also known as ispaghula, isabgol, or simply as psyllium, are portions of the seeds of the plant Plantago ovata, (genus Plantago), a native of India and Pakistan. They are soluble in water, expanding and becoming mucilaginous when wet.

In addition to its traditional and current use for constipation, psyllium was also used topically by herbalists to treat skin irritations, including poison ivy reactions and insect bites and stings. It has also been used in traditional herbal systems of China and India to treat diarrhea, hemorrhoids, bladder problems, and high blood pressure.

Psyllium is a bulk-forming laxative and is high in both fiber and mucilage. Psyllium seeds contain 10–30% mucilage. The laxative properties of psyllium are due to the swelling of the husk when it comes in contact with water. This forms a gelatinous mass that keeps feces hydrated and soft, provided it is taken with sufficient water. The resulting bulk stimulates a reflex contraction of the walls of the bowel, followed by emptying.1

Psyllium is a common ingredient in over-the-counter bulk laxative products. One preliminary trial found that psyllium seeds relieved constipation when it was due to lifestyle factors (e.g., inadequate fiber, sedentary lifestyle), but not when an actual disease was the cause.2 Numerous double-blind trials have found that supplementation with psyllium can lower total cholesterol and LDL (“bad”) cholesterol.3 However, levels of HDL (“good”) cholesterol are not affected by psyllium supplementation.4 The cholesterol-lowering effect of psyllium has been reported in children,5 as well as in adults.6 Psyllium supplementation has also improved blood sugar levels in some people with diabetes.7 8 9 The soluble fiber component of psyllium is believed to account for this effect.

In a double-blind trial, people with ulcerative colitis had a reduction in symptoms such as bleeding and remained in remission longer when they took 20 grams of ground psyllium seeds twice daily with water compared to the use of the medication mesalamine alone.10 Also, the combination of the two was slightly more effective than either alone.

How much is usually taken?

The suggested intake of psyllium husks to treat constipation is 1 teaspoon (approximately 5 grams) three times per day. Alternatively, some references suggest taking 2–6 teaspoons (10–30 grams) of the whole seeds per day—typically taken in three even amounts throughout the day.11 This is stirred into a large glass of water or juice and drunk immediately before it thickens.12 It is best to follow label instructions on over-the-counter psyllium products for constipation. It is important to maintain a high water intake when using psyllium.

Are there any side effects or interactions?

Using psyllium in recommended amounts is generally safe. People with chronic constipation should seek the advice of a healthcare professional. Some people with irritable bowel syndrome feel worse when taking psyllium and may do better with soluble fiber, such as in fruit. People with an obstruction of the bowel or people with diabetes who have difficulty regulating their blood sugar should not use psyllium.13 Side effects, such as allergic skin and respiratory reactions to psyllium dust, have largely been limited to people working in factories manufacturing psyllium products.

back to colon cleanse page